El Salvador is a country in Central America, bounded by the Pacific Ocean and the Ring of Fire, it is a coffee loving nation. Its rich volcanic soil and high altitude cultivates the highest quality Arabica coffee and some of the best on the world.

Coffee growing was its primary export worldwide during many decades and now the civil war is over it is well on its way to becoming its main export to all coffee loving nations throughout the world. El Salvador is known as The Land of the Volcanoes, with up to 20 potentially active volcanoes, the country has its highest point at Cerro El Pital, La Palma at 2,730 masl / (8,957 feet). The volcanic rich soil, altitude and its climatic conditions enables the country to grow rich sweet cherry beans, namely Red Bourbon variety and the Pacamara varietal.

El Salvador is known to be one of the most productive single origin coffee producing country in the world. The coffee from El Salvador is known for its sweetness with a nice creamy body and chocolate notes, the altitude provides a mild citric acidity which leads to a very balanced coffee that makes a great espresso. 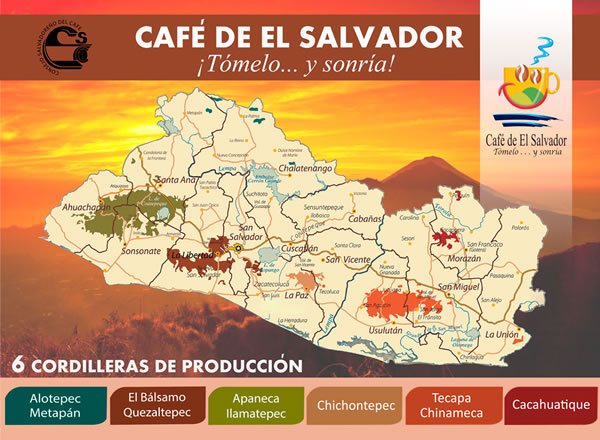 Salvadoran coffee has been through highs and lows. Introduced in the 1850s, it became the countrys number 1 export due to its quality  and since the 1980s the industry has started to regain its standing in the coffee world.

El Salvador only produces the Arabica coffee beans. The Red Bourbon specie varitety represents 68% of the total cultivated area. The Pacamara makes up 29% with the balance 3% consisting of Caturra, Catuai and Catisic variety.

The Pacas mutation of Bourbon was identified in El Salvador. The variety has been crossed with the Marogogy(i)pe (elephant bean) to produce the Pacamara variety (which is produces a higher yield, and still has superb cup quality). Both these are desirable varieties produced in El Salvador.

Check out why people like to visit El Salvador.